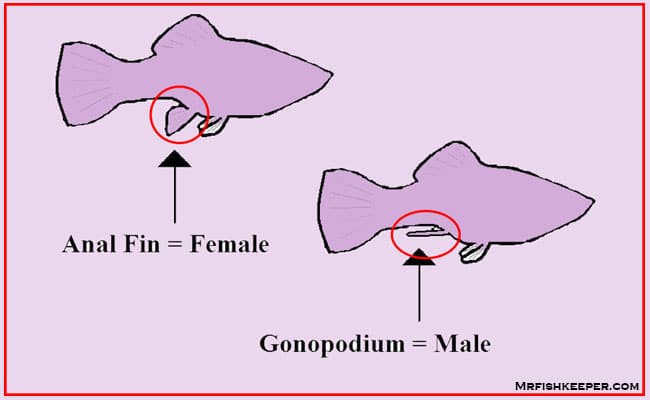 How to identify Male and Female Mollies? (5+ Signs to Know)

Sailfin Molly is the type of molly popularly known for its beautiful and attractive fins as the name shows. It is a peaceful fish and everyone likes to keep it in his aquarium. First of all, molly was studied in 1821, by a naturalist Charles Alexandre as Mollinesia latipinna at New Harmony, Indiana. But later it was studied by Leseur in detail as Mollinesea multilineata. Later ICZN THE INTERNATIONAL COMMISSION ON ZOOLOGICAL NOMENCLATURE described it as Mollinesia latipinna lesueur. It is widely distributed in freshwater, swamps and estuaries, and wetlands of Mexico, Texas, North Carolina. Sailfin mollies were introduced in California and cause bad effects on their native endangered pupfish species. In different languages, sailfin molly is famous by different names like

Basically, there are two types of molly

Almost all other types are breeds of these two types. Various other types exist on the basis of color. like

It is a peaceful fish native to North America. Usually found in brackish, ditches, and pons. It is suitable for hard water as well and can easily live in a community. It requires a huge space for swimming so you need a large size tan to keep it.

It is the result of the interbreeding of three molly fishes. It is green in color with orange spots on the body.

As the name shows it is black in appearance. It is also called midnight molly. It is also a hybrid of two species. A beginner can also keep this fish.

It is closely related to guppies. Its color is greenish to silver along with yellow and brown patterns. During breeding its color changes to blue.

As the name shows it is silver in color. It has beautiful and sparkling silver scales along with fins. Females are heavier while males have beautiful color patterns.

these are giant mollies and blue in color. It is the result of interbreeding of blue molly with marble molly

the body color is golden with white and black spots. It has a cool temperament. If it is not fed properly, it may eat your aquarium plants.

Need a lot of space to free space In the tank. Omnivorous but detritus too in feeding habits.

As the name shows it is native of the Yucatan peninsula.  Huge variations among color patterns especially in males.

These fish like to live in hard water. So keep that plants that can withstand a little bit high concentration of salt. It is also omnivorous and peaceful.

Molly is a very calm and peaceful fish. It can adjust in any tank almost with all species. Sailfin is a small-sized, elongated, and flattened fish having a gray color with stripes and spots on its whole body. They have large and broad caudal fin. Pelvic fins are present anterior to the dorsal fin. The dorsal fin is large in both genders. The mouth is directed upward to take oxygen from the upper layer of water. As they are bottom dwellers so their mouth helps them to take oxygen from upside and survive in the bottom.

The body color is grey with spots along the lateral sides that merge and appear like strips. There are many varieties that result from cross-breeding therefore other colors may also exist. Teeth are also present In the form of rows.

Sailfin fish is small-sized fish. Males get mature earlier than females and die within the year after getting sexually mature. Maximum they can grow maximum for 3 years if conditions are more favorable to them. In this time period, they can attain a size of 7-15cm.

It is a myth about sailfins that females have the ability to reverse their gender and changed into males. The reason is that the males that mature late, looks like females in physical appearance because first, they grow and then attain maturity.

Usually, there are no distinct differences between the two gender but you can find the difference in one character and i.e. the dorsal fin. The dorsal fin of males is larger than females.

Sailfin mollies are omnivore’s means they can feed on both plants and animals. Mostly sailfin mollies feed on phytoplankton and zooplankton, invertebrates including mosquito larvae, and they also feed on flakes and chunks. The most favorite food includes flakes.

Sailfin Molly is a cute fish, doesn’t demand any special care. Caring for sailfish is easy in a way that you provide them with food that contains a large proportion of algae, also provides them with flakes of brine shrimp. Maximum lighting also boosts their growth.

You must feed your sailfin fish two to three times a day. Try not to overfeed your fish, in case of overfeeding it may die.

To keep sailfin fish you do not need to worry about setting up the tank. Simply you need a large size tank, add water into it. First of all, it is very important to recycle the tank then after balancing all the water quality parameters, you can add your fish into your fish tank. The tank size totally depends on which type of sailfish you are going to keep. The best tank size for sailfin fish is 10 gallons for short-finned fish but in the case of large finned fish, you should use a 20-gallon water tank.

Sailfin fish is used by aquarists to cycle their tanks because of their salt tolerance ability To keep the water warmer, you need a good quality heater because sailfin prefers to live in a slightly warmer environment. To create its preferable environment you should place a good quality heater in your tank. To keep in check the salt content you must also need to keep water salt content and ph up to the level for your fish health.

To avoid blooms or other pollutants away from the water, you should also keep clean the water. For this purpose, you need a good quality water testing kit and filter. It is advised to change your one-third water on a weekly basis to avoid stress to your fish

As mentioned earlier, sailfin fish can easily live in freshwater, brackish as well as saltwater. So it doesn’t matter how much salt content is in your water tank. Its loving environment is slightly alkaline. So the optimum pH for sailfin fish is 8.1- 8.4.

Selecting the mates of sailfish is not a difficult task. As you know that Sailfish Molly is friendly fish you can keep them with angelfish, platies, swordtails, tetras, catfish, barbs, cory cats, guppies, loaches, and rainbowfishes.

It is better to keep one male with two to three females. Do not overpopulate your tank it may cause stress to your fish and result in the death of your fish.

As the molly fish is live brooder means the female stores male gametes into its body, after fertilization development takes place within the female body. After completion of the gestation period, the female gives birth to the fish fry.

The Gestation time period in the case of sailfin molly is 21-28 days. After its completion, the female sailfin fish give birth to 15-150 fry fish. There is no parental care behavior in sailfin fish. It is advised to separate the gravid female in a separate breeding tank to avoid predators and stress too.

Sailfin fish is a calm and peaceful molly type. It doesn’t harm others. But others do because of its small size. Major predators are giant water bugs, frogs, raccoons, alligators.

Most parasites that attack sailfin are

These both cause ich or white spot disease.

When you discuss types of mollies, some mollies can live in freshwater and some need a pinch of salt in water. Most mollies are peaceful and can adjust if you provide them high-quality aquarium. Don’t need special care and doesn’t expensive at all. Easily available in markets. They need a huge space to swim so, require a large-sized aquarium. I hope so you will like this fish and the next day definitely visit the market to buy this!!!